Now Available on Amazon.com for only $2.00 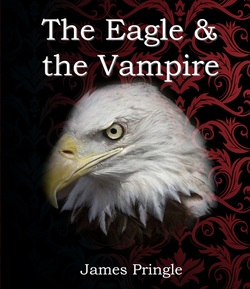 The Eagle and the Vampire
Eagles are very rare on the strip of land known as Long Island; extending east from Queens, New York; positioned where the Long Island Sound body of water sits between Long Island and the southern line of Connecticut.

In order to witness a Golden Eagle soaring, the sky must be painted with cumulus clouds that filter the warming rays of the sun. When Eagles soar their wings stretch to the fullest for absorption of all of the Suns energy as God gives freely.

At this moment one Eagle in particular appears to be drifting, in a circular pattern, around Montauk, the farthest point east on Long Island. As it is normal for a Bird of Prey to circle a point, it is usually for food. Today, the Eagle is circling above the extensive Sorenson Family estate. A block of manicured land that the Sorenson family bought while J.P. Morgan was taking control of U.S. Steel in 1901. Arthur Sorenson had been one of Morgan's attorney's and confidants, growing the families financial strength whenever the "House of Morgan" touched the United States and Europe which had been often and extensive.  It was know secret that the entire financial community knew the Sorenson family was one of the most influential, and  powerful Families of the World.

It was Tuesday night when the Sorenson family exited the family plane at Charles de Gaulle Airport. John Sorenson new the Louvre was closed on Tuesday's and thus Ronald would be able to head over first thing in the morning. Le Meurice, the Paris flagship for the Dorchester group of hotels had sent a car. The hotel knew the protocol for the Sorenson family. In part, due to John Sorenson having gone to school with the Sultan of Brunei - the owner of the Dorchester properties;  but more importantly, Le Meuice was located virtually next door to the Louvre and it remained home to the world's most famous artists after Salvador Dali had made it famous in one of his early works.

With the Louvre opening up at 9AM, Ronald was in and out of breakfast by 8:30. He was planning to spend all day entranced by the beauty and elegance of the Renascence masters. It was Wednesday, one of two days in the week that the Louvre is open until 9:45PM.  With only a late lunch break at the museums Le Café' Mollie; Ronald looked forward to a fresh banquette, the cheese and pat'e of the day, with a glass of burgundy.

Veronica Drak was stunning. Five foot, nine inches and all legs. Not only was she Olive-complected, with alabaster skin, she was passable for a Victoria Secret model.  When every man, and woman froze from her beauty, She knew she was the Queen. Veronica shined like a brilliant star attracting the elegance of night, she would milk it for all that she could.

But, little did anyone know, that her pale complexion and nocturnal life-style were family traits. Her father was non-other than the infamous Count Dracula.

To continue reading, the rest of the book is available at a nominal price of
$2.00
From Amazon.com
Buy Now
Powered by